And from our Euro Bureau (with an obvious focus on Skyrunning): 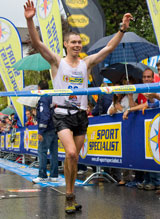 This is sweet pay-back for the Brit’s great dual with Kilian Jornet at Spain’s Zegama marathon back in May where Owens finished 2nd. His win yesterday only adds to an already terrific year. Along with Zegama, he claimed 3rd at the Gore-Tex Transrockies Run in Colorado teaming with fellow Brit Ricky Lightfoot. In 2011, Owens also records a 1st at Mournes Peak Race, 1st at Yorkshire 3 Peaks, 1st at the TransGrancanaria Marathon, and a 1st at Carenthy 5 Hill Race, meaning he didn’t forget to return home to do some work on his more local turf.

As for the final rankings in the SWS, Spain claims the men’s and women’s world champion titles as Luis 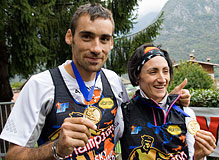 Alberto Hernando and Oihana Kortazar put the finishing touches on their stellar 2011 SWS campaigns. Hernando was third in yesterday’s race and Kortazar took second in the women’s race. The two Spaniards are now invited to the Skyrunner Super Cup on Malaysia’s Mount Kinabalu where they will contend with other skyrunning champions and record holders for the Super Cup trophy. This takes place on October 22nd and 23rd.
In the final SWS rankings, Mikhail Maamlev of Italy was 2nd and Spaniard Jabi Olabarria took 3rd. The women’s podium was completed by Emanuela Brizio and Corinne Favre of France.

Inside Trail is eagerly looking forward to covering the entire 2012 Skyrunner World Series. Stay-tuned for that.