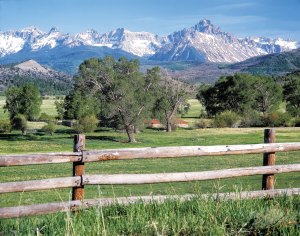 After running the Hardrock 100 this summer, Footfeathers is all over anything going on in the San Juans, so he offers up his overview of a new event taking place this weekend.
If a 100 mile race is crazy, then what do you call a 1,000 mile race?
The Silverton 1000 Mile Challenge, of course, and it’s taking place now.
Before you faint thinking that this is equivalent to TEN Hardrock 100s, starting in Silverton, it’s not.  It is, however, a substantial challenge (obviously!).  The 1,000 mile challenge is part of the 1, 2, 3, and 6 day runs organized by the same folks who put on Across The Years, so all the same rules and format exists for this event.  The main rule is that one must run at least 1 mile per hour, every hour, so taking a 3  hour nap after 20 hours will get you disqualified.
The course is a certified one mile loop starting at the Kendal Mountain Lodge (the same facility used for Hardrock this year).  It is chip timed and has 235 ft of climb.  Yes, that means the 1,000 mile race has 235,000 ft of climb.  The winner of the 1,000 mile challenge receives $5,000 and a trophy.  According to the website, “All other 1000 mile finishers, if there are any, will receive a very unique finisher’s award.”  I certainly would hope they would receive an award.
For the “easier” event distances, there are some interesting incentives to reach certain milestones of mileage.  If one runs 300 miles in 72 hours, there’s a fat $5,000 bonus check.  The organizers say, “we believe that this is totally impossible.”  It has been done twice in the six year history of Across The Years.  John Geesler did it in 2003 and set the 48 hour American Record at 248 miles in the process, a record just broken this past May.  The legendary Yiannis Kouros was the second to do it, setting the 48 hour Wold Record at 256.9 miles in the process and finishing the 72 hours with 323 miles.  Of course that was at ATY held in Phoenix AZ and the course has almost no climb.  Silverton’s edition of this craziness is at 9,300 ft elevation and, as pointed out, each 100 miles covered has 23,500 ft of climb.

Aside from the Silverton sickness of which Footfeathers speaks, the trail-racing calendar looks a little light on this side of the pond; the European landscape, however, is pretty flush with mountain and fell competition.  As most already know, the 7th Goretex Trans Alpine 2011 is underway with a huge international field.  Joe Symonds and Lennox Jethro of Team Inov-8 Goretex Footwear will mostly likely contend this year (Joe’s older brother Andy and Tom Owens of Salomon won this event last year).  Symonds and Jethro will have to deal with Salomon’s Julien Chorier of France and his German teammate Philipp Reiter (perhaps some clarification for those of you critical of Chorier’s absence from the UTMB).  But with over 300 teams consisting of open men’s and women’s categories along with mixed and masters teams, this very challenging race should see all kinds of storylines develop.

The race begins in Oberstdorf, Germany, travels over 273km (170 miles), and finishes in Latsch, Italy.  The runners will see about 15,436m of ascent or over 50,600ft.  Need less to say, this is a genuine Alpine traverse.  The website makes specific note of the 2nd and 3rd stages, perhaps giving athletes the most difficulty.  The 2nd stage (“from Hirschegg to Schruns [Austria], is the King’s stage”) crosses three mountain ranges (the Allgaeu and Lechtal Alps, as well as the Verwall group), and climbs more than 8200ft through 33 miles.  The 3rd stage includes one of the more beautiful trails in the central Alps, the Wormser Hohenweg; this might help distract from the suffering runners will endure as they run over 26 miles and climb over 8700ft.

Mud Sweat and Tears has its typically good reads on the mountain and fell racing in the British Isles.  This weekend sees several “big” events.  The Ben Nevis race, though not included in the World Skyrunning World Series this year, includes competition from runners like 2010 winner Finlay Wild, English Fell Running Champ Lloyd Taggart, Salomon’s Ricky Lightfoot, and 2009 Ben Nevis winner and 2005 World Skyrunning World Series champ Rob Jeb (who might scratch due to injury). Veteran mountain runner Angela Mudge looks to lead the women in this classic they call The Ben.

Beyond that, the Pedol Peris Horseshoe in North Wales goes off this weekend, sending runners across 17.5 miles and up 8500ft; and the junior version Half Peris goes 8.5 miles and 4500ft.  Clearly these are occasions for runners to go hard and enjoy a few post race pints.  Last is the Preseli Bluestone Fell Race that gives runners a chance to hammer-out 13 miles and 2500ft of gain across some grassy knolls.  More pints!

Granted, we’re just scratching the surface of some of this international off-road racing, but, again, it’s what drives the continuing inspiration and education at Inside Trail.